It was a cold winter morning. Everyone was buzzing with excitement as we all knew that this was the first time we would be taking the Tube, and on top of that, we would be visiting the Globe for a full day of workshops. Hence, all of us made our way to Ealing Broadway tube station, eager and excited  for what was in store for us this day.

When we reached the tube station, it was as if the train station had come straight out from a movie. We were a little tense, as it was full of people hurrying into the train cabins before they closed. Even though it wasn’t during the peak period, the train cabins were crowded and all of us squeezed into them. We literally felt like a packed can of sardines in the train! I realized that compared to the MRT in Singapore, the train cabins were much narrower and shorter, which surprised me as I thought it would be much higher to accommodate the height of Londoners , who are much taller than we Asians. All of us swayed and stumbled as the train moved, clinging onto each other in order to not fall down.

After about 10 stops on the Central Line, we finally alighted at St Paul’s and made our way to St Paul’s Cathedral. The teachers gave us some free time to roam around the cathedral and take photos. We had the opportunity to go inside the Cathedral, but we were not able to look around the entire interior because we had to pay for it. However, just by looking at a small portion of the interior, I could already see how intricate and detailed the design was, and feel the glory and magnificence of this place designed by Sir Christopher Wren.

When we were done, we made our way to the Globe theatre via the Millennium Bridge. When we entered the Globe, we were warmly welcomed by our guide, Mary who used to be an actress and now lectured at the University of East Anglia.  She brought us into the Globe Theatre. But before bringing us inside, she gave us a brief overview about the history of the theatre and of theatre in London in general. I learnt that the original name for Shakespeare’s Globe was the Globe Playhouse, but Shakespeare’s name was added due to commercial purposes. Also, she explained how theatre was seen historically as an equivalent to brothels and casinos – entertainment that the church and government disapproved of.  When she brought us inside, the air was filled with our ‘ooh’s and ‘ah’s as everyone marvelled at the theatre’s unique and detailed architecture. It was as if we travelled back to the olden days!

Mary brought us backstage, where she further elaborated on the features of the theatre as well as the economic importance of theatre in London. She then made us walk onto the stage from backstage, to allow us to experience entering the stage from the actor’s point of view. She then made us carry out a few activities on stage, teaching us how we can attract the audience simply by the positioning of the actors on stage. She also further elaborated on the features of the theatre and answered all our queries regarding the structure of the theatre and plays in general.

After lunch, we had a workshop lead by Mary as well. She made us experiment with our body language to portray different types of behaviour and also made us act out scenes from the Duchess of Malfi. From this, I learnt that we could tell the character’s personality simply by from body language and language they use! 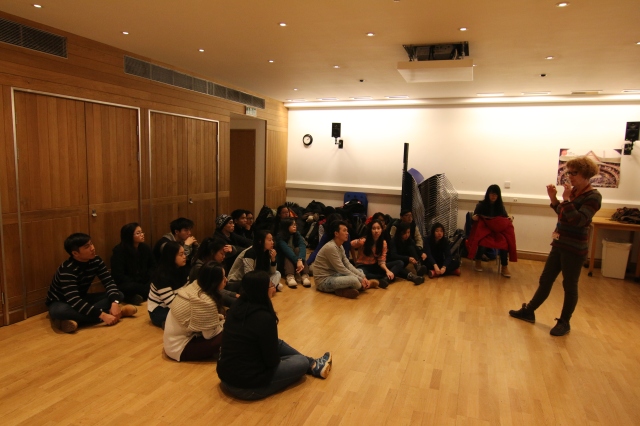 I found it unexpectedly fun as I never liked acting. However it was an enjoyable experience trying to act out different characters and learning how to emphasize words. It sparked an interest in me to study plays and I hope explore this more when I have free time.

We then made our way to the Tate Modern. The Tate Modern is one of the world’s largest contemporary art museums with a whopping 5 million visitors a year! We were amazed at the structure of the building, formerly Bankside Power Station. There, we were given the opportunity to look around the galleries and choose a painting for one of our exercises in the workbook. I was surprised at the huge array of artwork. Of course I didn’t manage to finish seeing all of them in one visit! I hope I could come back next time to explore more.  As someone who is interested in artwork, I found it fascinating to see artworks of famous painters, such as Salvador Dali and Pablo Picasso, in real life!

Before returning to the Globe theatre to watch a play, we ate our dinner at Gourmet Burger King. We filled our stomachs with delicious burgers and fries, and everyone felt satisfied and happy with their food.

We watched ‘The Little Match Girl’ in the Sam Wanamaker playhouse. It was really an interesting experience sitting really close to the stage, where the actors interacted with us a lot, breaking the fourth wall. I really enjoyed the play as I could relate the storyline of the various childhood stories I used to read, and it was interesting how they added the modern twist to all the stories, such as including jesters or using modern lingo.

Today was a tiring but enjoyable experience and I’m excited for what’s to come the next few days!